Our History and Future

STEWARDSHIP OF THE LAND: OUR HISTORY AND FUTURE

Written by Peter VanderZaag (based on his personal observations and experiences since the 1950s.)

Taking care of the land has always been our family’s priority. Thinking about sustainability and land stewardship leads me to look back over the 70 years and forward to the new opportunities as we continue improving our future farming practices.

The first VanderZaag 100 acre farm was purchased in 1952. It was a relatively level farm resembling the land in the the Netherlands from whence the family came. As the land was of a loamy texture it was believed to be suitable for all crops and especially for potatoes. During the first 11 years the farm was a mixed cropping farm with potatoes, grain crops and hay grown along with cows and pigs. The rotation with leguminous hay crops along with manure and very little inorganic fertilizer allowed for a sustainable farming system. As a kid, I helped with fall plowing and the rule was to only bring up a little subsoil, not too much! The plow depth was roughly 15 cm of topsoil followed by subsoil of either sand or clay. Soil health was excellent with thousands of seagulls coming to the fields to get the earth worms while we were plowing.

Starting in 1963, our farming style changed dramatically. The cows were sold and only 200 or so pigs were fattened at a time with less manure for the land. The VanderZaag farm numbers increased, potato acreages increased and more larger equipment permitted the rapid expansion. Crop rotation was less diversified. There was also the start of moving to more sandy ground farms. Potatoes were grown on these lands every other year by our family. Other farmers started doing monoculture of potatoes every year as they rapidly expanded their potato acreage to meet demand.

Tobacco farming also reached its peak during this time and frequent sandstorms clouded the skies in the areas where the sandy ground lay bare. Wind and water erosion were a common scene in many areas around the sand belts. One nearby farmer warned that south Simcoe would become a desert if we all didn’t plant wind breaks and maintain small fields of different crops. Soon problems started to arise with soil nematodes and verticillium wilt on potato plants, especially on the sandy portions of some fields. I recall in 1970, taking soil and plant samples to Cornell University for analysis in a special laboratory to determine why plants weren’t growing well in certain parts of some of our potato fields. Tuber yields were decreasing and the harvest was often of poor quality potatoes on many of these sandy soils. Only later did extension personnel and farmers really start to under the importance of nutrient balance in the soil. With the high rates of inorganic fertilizers being used by many farmers, generally simply a mixture of 15 % Nitrogen, 15% Phosphorus and 15% potassium, this resulted in soils with very low Calcium and Magnesium levels and the soil pH would decrease to well below 5.5. Organic matter content was also not treasured and with repeated potato planting the levels decreased.

The period of dramatic correction in farming practices: 1980-1990

By 1980 there was a period of rapid inflation and high interest rates which severely curtailed the farm enterprises that were heavily leveraged with bank credit. This coupled with the further deterioration of the soil quality in the greater area resulted in a dramatic change in who and how farming was being done. Salada Foods permanently closed its doors in 1985 reducing the acreage of potatoes dramatically. The Tobacco sector declined to almost no farmers remaining.

Some sandy land quality had become so bad that they were either abandoned, planted to Christmas trees or forested by the county. Then came the summer of 1986, which resulted in a very heavy rainfall during the end of the growing season and harvest period. Many fields were never harvested and remained abandoned thereafter for several years. Some of the potatoes that were harvested totally rotted in storage. Again several large potato growers quit the potato business after that discouraging period of years and particularly 1986.

When Carla and I decided to return to North America to raise our family, we chose to make it on a farm near where I grew up. How does a newcomer with very little capital start a farm? After doing an extensive survey in the summer of 1990, it was clear that there were numerous abandoned farms as well as other farms that were marginal in productivity that could be rented as a starting point in establishing a viable potato operation. Further more the decade of the 1990s was seeing a global shift away from more production to more of a sustainable focus in taking care of our greater planet.

Against that backdrop the word SunRISE (Sustainability Research Including Systems Education) was registered as the word that would describe our farm and its regenerative agricultural practice philosophy. Sunrise was prepared to take the challenge of developing a system whereby these abandoned and poor quality farms could be improved through applied research and also learn from the experts on the various components of how to restore these soils to a highly productive state. We knew this would take time. Precision agricultural practices were already available including soil sampling and variable rate nutrient applications using GPS as well as practices to ameliorate soil organic matter and reestablishing good soil health. Generally, I observed very high levels of soil potassium in some parts of these abandoned fields coupled with very low levels of Calcium and Magnesium. This was corrected by variable rate application of the needed nutrients on every acre of the farm based on the soil analysis data.

Literally some of the farms we rented and purchased (3 farms) wouldn’t even grow a hardy crop like barley. Others (4 farms) still had the potato ridges from 1986 remaining with volunteer trees growing throughout the fields! Tile drainage was done on each of those farms to mitigate the risk. Manure was secured through an agreement with a beef cattle feedlot that was able to provide excellent quality liquid manure for up to 600 acres of our potato land annually starting in 1994. Soil health was the main focus in restoring these farms to a productive state. This took time and in the early years of this transition there were portions of fields that were left to grow cover crops every year to improve the soil organic matter. Numerous experts were engaged in the whole process of regenerating these farms. Variable rate applications of some nutrients including gypsum and lime were required to create a healthy soil environment for the microbial habitat and for potato plant roots to flourish.

Irrigation became more and more essential to help improve production during dry spells that seem to occur more frequently and especially impacted the sandy farms. Small amounts of water at critical times can greatly improved the productivity of the land. When possible irrigation facilities were added to farms where there was a source of water. 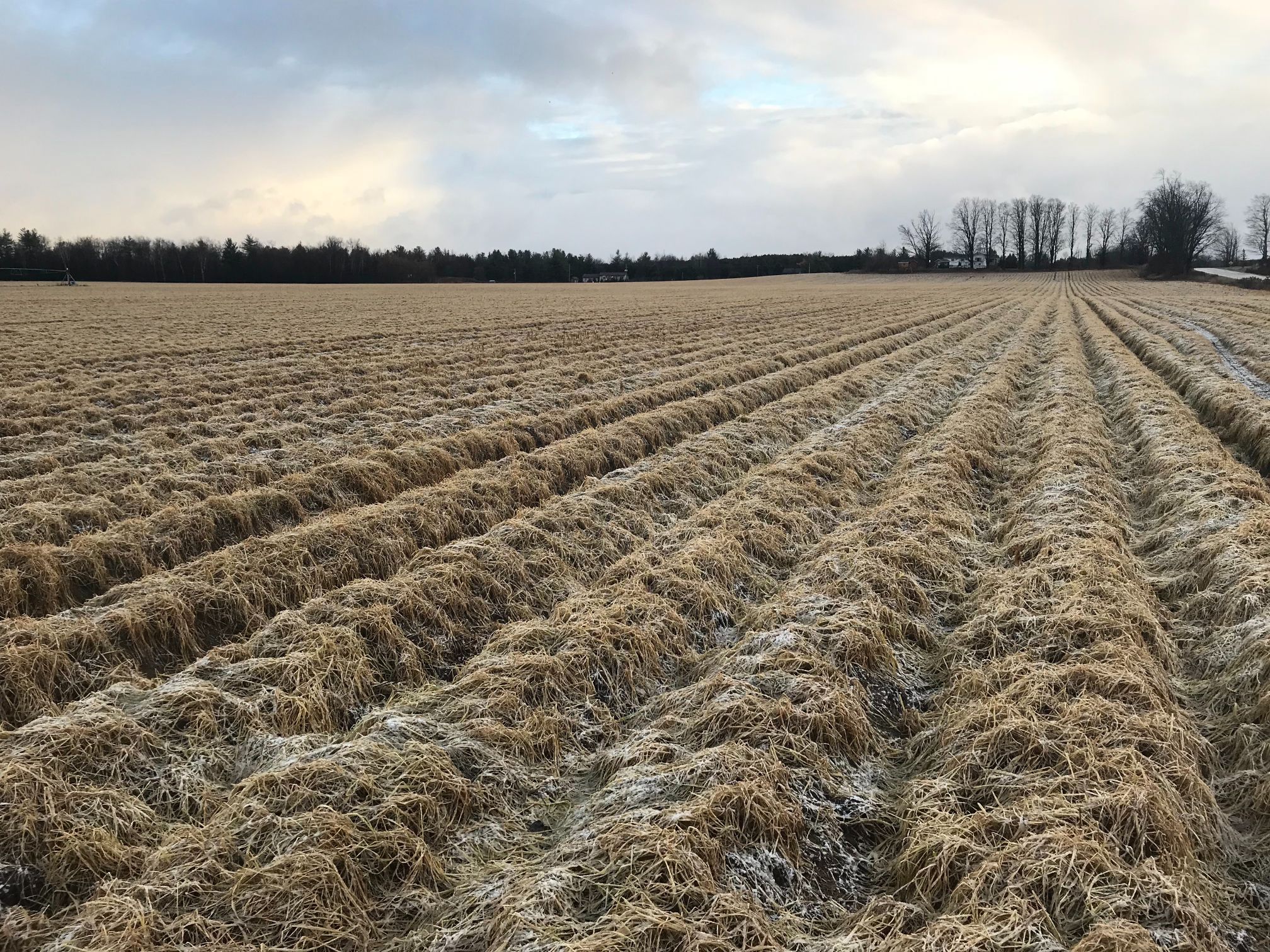 A rapid expansion of potato production occurred during this period with Ruth and Nick joining the business and bringing many new and good ideas to the farming operation. Continued focus was on the use of manure, rotation crops as well as cover crops, primarily Rye being grown after the grain or potato harvests. This not only helped build organic matter and soil health but stopped all forms of possible erosion. Experimentation was done with deep tillage, fall bedding of the potato rows with a cover crop and many other small improvements were made to reduce tillage to a minimum. Manure use has decreased and focuses on the farms that are newly acquired or need it most based on soil tests.

Is driving our Sustainability efforts as we measure our Green House Gas (GHGs) for all facets of our farming operation. Each year we strive to improve our score and meet the high standards that the our potato customers demand.

We comply and are certified with CanadaGAP

A program to promote excellent agricultural practices that provide the needed criteria for food safety. Annually we are inspected and all records are reviewed to meet the recertification requirements.

In 2011, Sunrise Potato invested in a 250 kWh solar system under the Ontario FEED IN TARIF (FIT) program. This system is on the south facing slopes of the roof on our potato storage. This innovation has allowed Sunrise to be more sustainable in producing a good portion of their own electricity needs.

Potato production expands to the neighbouring highlands of Dufferin County.

There are several reasons for this shift in potato production to new land in the neighbouring highlands, starting in the 1990s. As already mentioned, the productivity of many of the south Simcoe soils were low and restoration takes time. Population growth along with factories such as Honda coming to the area in the late 1980s had driven up the price of land and utilized some of the potato lands for housing and industry.

This continues and makes the economics of potato farming harder to justify considering the cost of the land to own or rent. Meanwhile with new better adapted potato varieties and a general trend of a warming climate, the highlands with high organic matter healthy soils proved to be an excellent option for growing potatoes, even if they were transported it Alliston storage facilities or were stored in the highlands.

Sustainability not only applies to soil health but also to the economics of potato farming to continue in south Simcoe.

In reviewing the past 70 years of farming around the Alliston area, there have been major transformations in land use. Since 1991, all remaining successful farmers have implemented various levels of land stewardship to allow for economically viable farming practices. Education and Research efforts have greatly enhanced our understanding of how to build back our soils to good productivity and be healthy. Reduced tillage and cover crops along with soil analysis have all contributed to the overall improvement of our farming communities.

Sunrise Potato is also 100% committed to leave the land better for each coming generation.